In recent years, in automotive industry, as an effort to reduce the weight of a vehicle toward improving fuel economy, investigation of resinification of automobile window glass is proceeding. Polycarbonate (PC) resin, which has half weight of inorganic glass and 200 times impact resistance, is attracting attention as a material contributing to weight reduction.
On the other hand, PC-resin has lower abrasion resistance than inorganic glass, and it has another disadvantage that it tends to discolor by ultraviolet rays or the like. In order to solve these problems, Teijin developed a technology to impart high weather resistance to PC-resin and abrasion resistance comparable to inorganic glass, realizing automobile window glass with large and complex curved surface. Moreover, we have gained great appraisal both domestically and overseas in anticipation of mounting on actual vehicles using these technologies and working on industrialization (Received The Award of the Society of Polymer Science, Japan, 2013).

By utilizing compound technology, Teijin realized the function to efficiently cut ultraviolet rays and near-infrared rays (heat rays) while maintaining transparency of PC-resin. This shielding technology not only prevents sunburn, but also makes it possible to suppress the rise of temperature inside the car due to sunlight, and it is expected to improve fuel and electricity comsumptions by improving air conditioning efficiency.

We realized the abrasion resistance required for the United Nations Standard "Agreement rules pertaining to window glass" (UN/ECE R43 rev.4) by forming the dry coating layer with the plasma enhanced-chemical vapor deposition (PE-CVD) technology on the conventional wet hard coating layer which is formed by curing the liquid lacquer. And we realized the abrasion resistance, adhesion and heat resistance in a good balance by the graded structure designed taking advantage of the accurate and uniform controllability of the deposition condition which is a feature of the parallel plates method PE-CVD. Furthermore, the CVD coating layer has excellent gas barrier performances and contributes the significant improvement of the weather resistance because it protects the polymer substrate from the deterioration by suppressing the permeation of oxygen and air.

Scratches on the surface of PC resin after abrasion test

By combining the above elemental technologies, Teijin realized a new resin front window beyond mere substitution of inorganic glass.
We secured the practical strength with the large three-dimensional injection press molding technology and the controlled graded thickness structure at the outer periphery of the front window. Furthermore, we realized a dramatic improvement in abrasion resistance and weatherability that can meet the safety glass standards (Class L) that have not been achieved by conventional surface processing technology (wet coating), by PE-CVD technology based on parallel plate method . We realized the resinification of resin front window in commercial production model for the first time in the world.
This resin front window is integrated with the viewing part and the pillar, so there is nothing to block visibility, contributing to refreshing driving in addition to securing safety. We will make cars lighter and make driving safer and more comfortable. For further practical application of resin window, Teijin will continue to respond with technology. 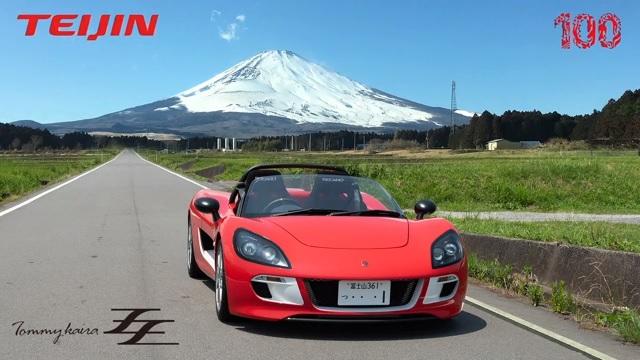