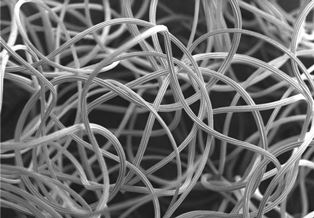 Synthetic staple fiber insulation that is extra shape-recovering after compression, bulky and lightweight is in demand as a substitute for natural feathers. There also is demand for extra bulky, lightweight and stretchable synthetic filament, but until now, manufacturers have found it difficult to produce such fiber that is both bulky and stretchable.

Teijin Frontier developed SOLOTEX Octa by transforming the cross-sectional shape of SOLOTEX, a stretchable, shape-recovering and high-cushioning material, into a highly modified cross section comprising eight projections aligned in a radial pattern around a hollow fiber.

SOLOTEX Octa offers the following features in addition to those of SOLOTEX:
• Shape-recovering after compression, highly bulky, lightweight and stretchable owing to the clearance between fibers.
• When used for staple fibers, maintains its coiled crimp structure with rigidity due to its cross-section shape, resulting in shape-recovering after compression, high stretchability and cushioning.
• Textiles are absorbent, quick drying, anti-transparent, and provide thermal barriers and insulation due to SOLOTEX Octa’s large surface area.

Teijin Frontier envisions a wide range of promising applications for SOLOTEX Octa, including fashionwear, industrial materials and more. The staple-fiber version will be used in place of feathers mainly for bedding. The filament version of SOLOTEX Octa will be used in textiles for sportswear and fashionwear.

About the Teijin Group
Teijin (TSE: 3401) is a technology-driven global group offering advanced solutions in the areas of environmental value; safety, security and disaster mitigation; and demographic change and increased health consciousness. Its main fields of operation are high-performance fibers such as aramid, carbon fibers & composites, healthcare, films, resin & plastic processing, polyester fibers, products converting and IT. The group has some 170 companies and around 19,000 employees spread out over 20 countries worldwide. It posted consolidated sales of JPY835 billion (USD 7.6 billion) and total assets of JPY 986.2 billion (USD 9 billion) in the fiscal year ending March 31, 2018.