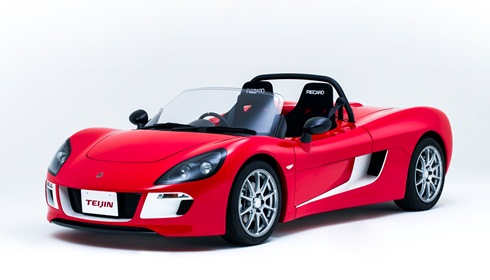 PC resins are prohibited from use in the front windows of automobiles due to automotive safety standards. Teijin’s PC-resin window, however, thanks to its high resistance to abrasion and weather, meets new Japanese standards that will become effective in July, paving the way for its use in the Tommykaira ZZ.

GLM expects to acquire street-ready certification for the Tommykaira ZZ fitted with Teijin’s PC-resin window, and then will offer the window as an option by autumn 2017.

Teijin also will market its PC-resin window for automakers in the U.S. and the EU, where demands for properties equivalent to new standards for safety and security are increasing.

Teijin is leveraging its lightweight, strong, high-performance materials and integrated composite technologies as one of the key focuses of the transformation strategies for the group’s medium-term management plan, under which the company aims to become a multi-material components supplier that works closely with automakers to develop various applications for lightweight automotive bodies.

Teijin, by thickening the perimeter of its PC-resin window, has managed to eliminate the need for the A-pillar, or vertical support that divides the windshield and front window. As a result, the transparent PC resin achieves unobstructed sight lines for safer driving and more enjoyable sightseeing. The integrated PC-resin pillar-less window also is 36% lighter in weight than a conventional front window with an A-pillar.

In March, Teijin developed a new plasma enhanced chemical vapor deposition (plasma CVD) hard-coating technology to the wet hard-coat layer, which offers the same level of abrasion resistance and weather resistance as glass windows. The company collaborated with Tsukishima Kikai Co., Ltd. to develop a plasma CVD pilot plant to treat large PC-resin windows with uniform coatings of plasma CVD. Large surfaces including the size of actual vehicle’s resin windows and those with complex curves are now being glazed at the pilot plant.

GLM has developed extensive relationships with Japanese enterprises, including Yaskawa Electric Corporation and Omron Corporation, to develop automotive parts based on advanced Japanese automotive technologies. Backed by such support, the company began mass-producing the Tommykaira ZZ in October 2015.

A Tommykaira ZZ model fitted with Teijin’s new PC-resin window will be unveiled at Automotive Engineering Exposition 2017 Nagoya, a leading automotive exhibition in Japan, which will be held at the Portmesse Nagoya (Nagoya International Exhibition Hall) from June 28 to 30.

Automotive front windows must satisfy a variety of regulations, including for light transmission, abrasion resistance and crash safety. While A-pillars provide protection in the event of a frontal collision, thicker A-pillars obstruct the driver’s view.

Japan’s new automotive safety standards will require plastics-glazed windows in models released from July to offer enhanced resistance to abrasion and weather. Simultaneously, PC-resin will become available for the use in automotive front windows.

About the Teijin Group
Teijin (TSE: 3401) is a technology-driven global group offering advanced solutions in the areas of environmental value; safety, security and disaster mitigation; and demographic change and increased health consciousness. Its main fields of operation are high-performance fibers such as aramid, carbon fibers & composites, healthcare, films, resin & plastic processing, polyester fibers, products converting and IT. The group has some 170 companies and around 19,000 employees spread out over 20 countries worldwide. It posted consolidated sales of JPY741.3 billion (USD 6.5 billion) and total assets of JPY 964.1 billion (USD 8.5 billion) in the fiscal year ending March 31, 2017.